Another day, another break-in.  Fortunately canine, not human thieves.  As Mike recounted in an earlier post, the beagles have conquered many a garbage can. 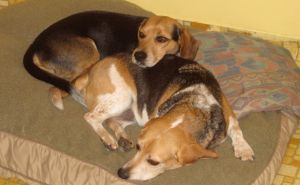 This time, it was a kitchen cupboard.  It’s where we used to keep packages of rice, pasta, sugar and other staples.  We even put a padlock on the cabinet, but since we get into that particular cupboard fairly often, we sometimes forget to lock it.

I forgot one too many times to put the lock back on and came home on one too many occasions to find rice or uncooked spaghetti scattered all over the floor and partially eaten. (Luckily the dogs either didn’t eat enough of it or were more or less okay from it.)  After that, we removed any food items that weren’t in a can or jar–containers we assumed the dogs couldn’t open.  For Pete’s sake, sometimes we have trouble opening those jars!

On a recent weekend I temporarily put some bags of dry lentils in that cupboard, put the lock on, albeit not all the way locked. When Mike and I returned we found black-eyed peas everywhere!  Later, evidence turned up that Scooter had indeed eaten a bunch of black-eyed peas.

The incident that really got us shaking our heads was the time I thought I smelled pizza on Scooter’s muzzle.  When I made my way into the kitchen, I found Harley licking up spaghetti sauce off the floor with just a small amount of sauce left in the jar.  We’re talking a 25 ounce jar of spaghetti sauce that Scooter (we know she’s the instigator) somehow cleverly got the lid off.  It was a brand new jar that had never been opened.  A friend surmised that since I had found the unopened jar in the living room the day before, the cap must have somehow loosened or the seal inside popped.

Still, how a creature lacking opposable thumbs managed to get a lid off a jar of spaghetti sauce that I struggle with is a mystery to me. With these two beagles you just never know! 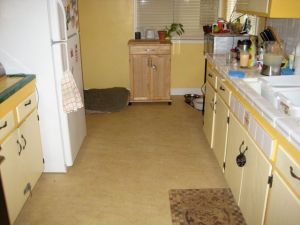 Our kitchen - locked cabinets and all

4 thoughts on “The Break-in”