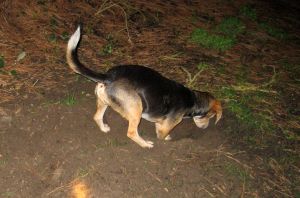 We woke up in the middle of the night to Harley’s barking.  This is not such an unusual occurrence, though we wish it were.  Mike got up and went to the kitchen to shake the treat jar, which normally brings the dogs running back inside the house.  This time it only worked to get Scooter out of bed.  Mike put on his robe and shoes, grabbed a leash, and went out to get Harley.  Turns out he was digging an enormous hole in the backyard, going after who knows what.  Mike got the digging fool back in the house, I closed the dog door shut, and that was that.

The next morning after breakfast, I noticed that Harley had been outside for a quite awhile.  I looked out the window, and there he was, digging that hole to China. Several holes, actually.  I managed to get him to come back in, and had to wipe a whole lot of dirt that was caked to his paws and nose.  He calmed down, and for the next day he only spent a little time digging, with some help from Scooter.

The following evening Harley was back at it.  Again, he had been out in the yard for a long time.  I had just gone out to check on him when he came around the corner.  It looked like he might have something in his mouth, and I assumed it was a bunch of dirt, as Harley likes to bite at the dirt to speed up the digging process.  I followed him down to the bedroom, and was about to take a look at how much dirt he had impacted in his mouth, when I jumped back.  He had a creature in his mouth!  I called out to Mike that Harley had more than mud in his jaws. It was a mole, and the poor thing was dead.  Fortunately Harley easily relinquished it to Mike, who immediately disposed of it.

Boy, did Harley want to know what Mike did with his (Harley’s!) catch.  He looked all over the room for that mole.  We distracted him with treats and pets, and he eventually forgot about it, more or less.

In the morning I took a good look at the yard.  There were about 4 holes out there. Tomorrow we will fill the holes in.  How long they will stay that way is up to Harley; I have a feeling not for long…